Most games of chess will feature exchanges of pieces. Indeed, it is not uncommon for the players to exchange pieces until there is almost nothing left on the board. However, this does not mean it is always good to exchange pieces - sometimes it can be to your advantage to avoid exchanging a particular piece, or to avoid any exchanges at all. Timing is also an important factor in exchanges - it is sometimes important to decide whether to capture first, or to wait for the opponent to initiate the exchange.

Exchange pieces when you're ahead in material

When you're ahead on material, it's often a good idea to exchange pieces, to increase the relative size of your advantage. Here is an example to illustrate the value of an extra bishop in different positions:

Here, white has an extra bishop, but there are a lot of pieces of both colours still on the board. If we count up the values of the pieces on the board, we can see that white has a material advantage of 38 to 35, an advantage of about 8%. If white were to pursue a policy of exchanging pieces, we might reach the position below:

White maintains an advantage of one bishop. This time, if we count up the value of the pieces, white has a material advantage of 8 to 5, which is still only a 3 point difference, but that is now equivalent to an extra 37.5%. White's advantage has increased by over four times. With no other pieces to oppose the bishop, white should win easily.

Not only does exchanging pieces increase the value of your material advantage, it also reduces the ability of the opponent to fight back. While the opponent retains many pieces, and especially if the enemy queen is still on the board, there is always the danger that they can stir up enough counterplay to pose a threat. Many games have been swindled by players who, when down on material, managed to whip up an attack and checkmate the enemy king or win enough material to take the advantage. Exchanging off all the pieces is a good way to avoid this possibility.

Of course, don't get carried away and exchange off everything - if you're left with only king and bishop against king, then that's a draw. When you're ahead in material, it's better to avoid exchanging too many pawns, and just exchange the other pieces. That way, you're always left with plenty of pawns to turn into queens later, when your opponent has no forces left to stop you with.

Avoid exchanges when you're behind in material

Naturally, if it's best to exchange pieces when you're ahead in material, it's something to avoid when you're behind. Don't fall into the trap of automatically exchanging pieces just because you can. If you're behind in material, it's especially important to try to preserve your most powerful pieces - the queen and rooks - as they can be used to swindle a draw or even a win if the opponent is lax in defence.

The exception to the rule is pawns - quite often, when you're behind in material in the endgame, it's a good idea to exchange pawns. Each enemy pawn you get rid of is a potential queen eliminated, and if you can exchange off all of your opponent's pawns, he might not have enough pieces left to checkmate you. Here is an example:

The most straightforward use of exchanges in an attack is to exchange off an enemy piece that is guarding an important square or piece. Here is a typical example:

Another way to use exchanges in an attack is to open lines for your pieces. If an enemy piece is blocking your path, you can sometimes lure it out of the way by capturing a piece it protects. A single exchange can sometimes open multiple lines, as the following example shows:

As we've seen previously, exchanging off the enemy queen can really take the sting out of an enemy attack. Exchanging off other attackers can only help too. Another way exchanges can be used defensively is to escape from double attacks and other tricky situations - by capturing an enemy piece, you can gain time to act while the opponent is busy recapturing.

However, not all exchanges are good when you are defending against an attack. You should avoid exchanges that help the opponent's attack by opening lines for their pieces or allowing a more dangerous enemy piece to replace the one you captured. Here is a warning:

Exchange to relieve a cramped position

Sometimes, especially when playing black, you might have to play a cramped position with little space to manoeuvre in. You may find that you have too many pieces for the squares available, and they get in each other's way. In this case, you should try to exchange some of your pieces to make some room. 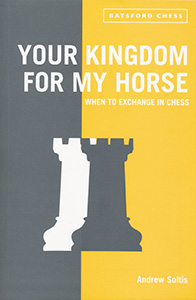 Your Kingdom for My Horse
by Andrew Soltis
View Details